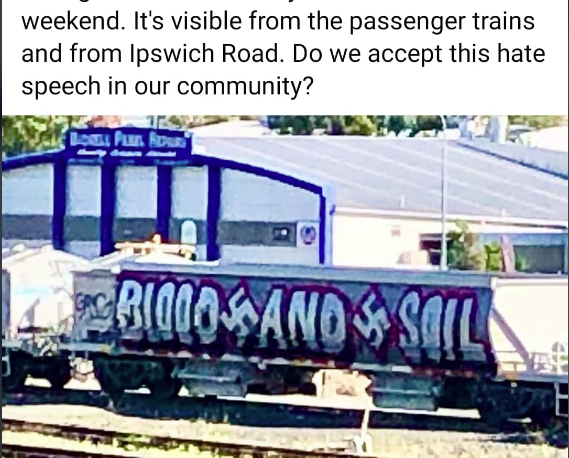 Another disgusting display of hatred and extreme racist beliefs has occurred in Brisbane.

Nazi graffiti emblazoned on a parked railway carriage in the Brisbane suburb of Moorooka blatantly demonstrates that there are Queenslanders who have deeply entrenched Nazi belief systems, according to the Queensland Jewish Board of Deputies (QJBD), the roof body of Queensland Jewry.

A social media post (image below) on a Moorooka community Facebook page shows the graffiti and the community’s outrage at the hatred on display in their suburb. 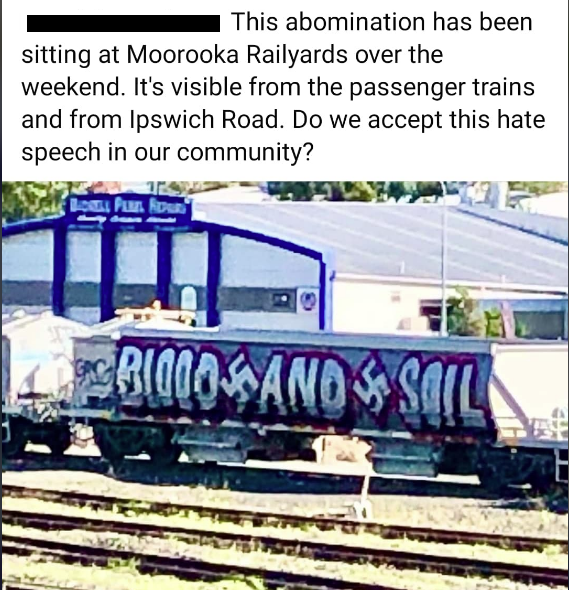 “’Blood and soil’ was a Nazi slogan used in Germany to promote the idea of a pure ‘Aryan’ race. To see this vile sentiment boldly expressed in suburban Brisbane is disgraceful and clearly shows a disturbing trend in the rise of antisemitism in Queensland.

“For people to graffiti this slogan, they would have a full understanding of its meaning: ‘blood’ refers to the goal of a ‘racially pure’ people and ‘soil’ was a mystical vision of the special relationship between the people and their land.”

Mr Steinberg said this kind of antisemitic-fueled graffiti should not be dismissed by anyone.

“Antisemitism is like a litmus test for racism and Queensland’s current laws provide little to deter people who peddle and publicise hate,” he said.

“The Queensland Government’s review into the anti-vilification laws is a great step forward to having clearer laws and penalties for people who are motivated to do these kinds of hatred-filled racist acts.

“All Queenslanders have the right to feel safe and protected, regardless of their religion or ethnicity. The increase in antisemitic acts, including graffiti, in this state shows a clear attack on a vulnerable minority.”