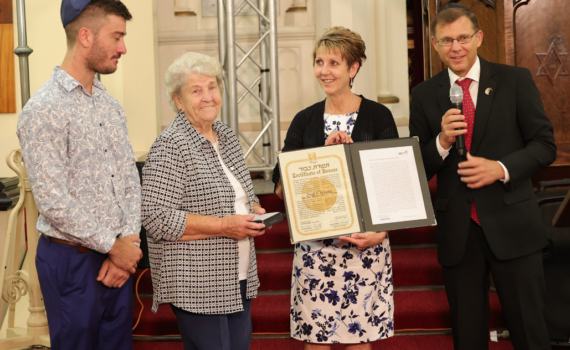 Thursday 22 October, the Israeli Embassy and Queensland Jewish Board of Deputies hosted a Righteous Among the Nations ceremony in Brisbane.

It was a truly memorable evening and you can watch the full ceremony exclusively on Australian Online News here. 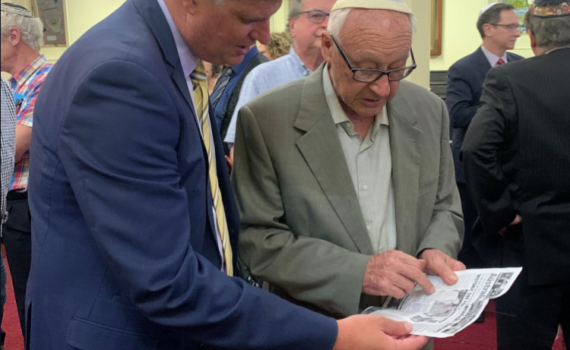 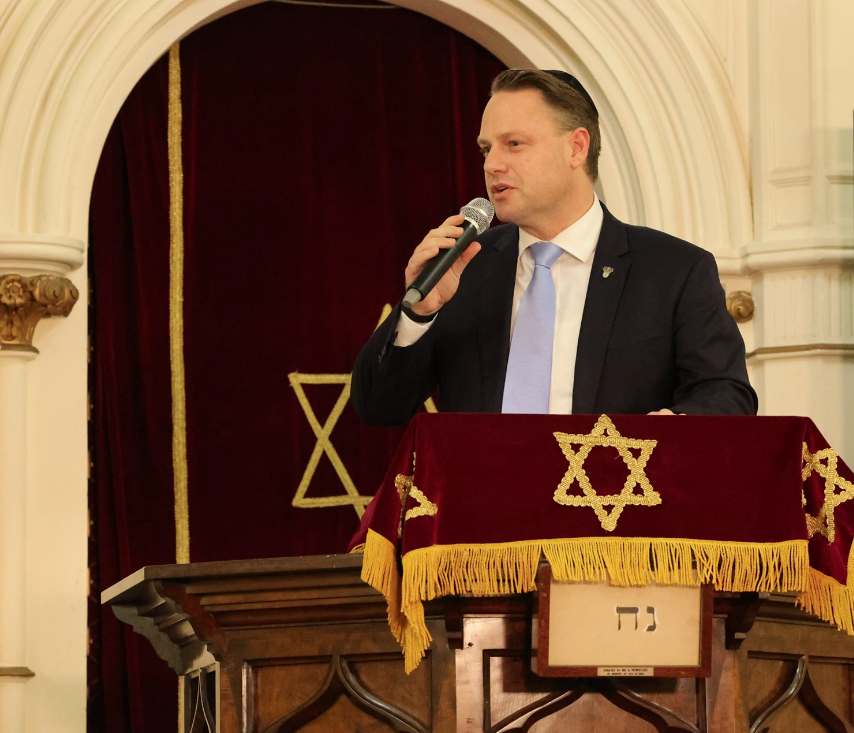 History in the making: a Holocaust museum and education centre to be established in Queensland

The Queensland Jewish community has welcomed the announcement by the Australian Government to contribute $3.5m to help establish a permanent Holocaust Museum and Education Centre in Queensland.

The museum will honour the six million Jews and 5 million other minorities murdered in the Holocaust by delivering educational programs about the Holocaust and other genocides.

Queensland Jewish Board of Deputies Vice-President Jason Steinberg said the announcement was an historic day for Queensland.

“Incidents of anti-Semitism and racial vilification are growing in Queensland, with right-wing extremist groups targeting our communities with their hate-filled messages,” Mr Steinberg said.

“One antidote to this kind of hate is to educate people about the devastation caused by the world’s most evil, racially motivated campaign,” he said.

“We appreciate the commitment from Federal Treasurer Josh Frydenberg, Minister for Education Daniel Tehan, and Senator Amanda Stoker for their support for today’s announcement to establish the museum in Queensland.

“At its core, the museum will help to empower individuals to stand up against hatred and prejudice, with the aim of preventing such violence and marginalisation from happening again.

“As new research from the United States this month shows, knowledge of the Holocaust is shocking – 23 per cent of adults aged 18-39 surveyed said they believed the Holocaust was a myth, had been exaggerated or weren’t sure.

“The development of a museum in Queensland is invaluable to ensure our state’s adults, children and future generations understand what happened.

“This high-tech and modern centre will support and nurture a more tolerant Queensland – now and in the future.”

This announcement means that Queensland can now join the ranks of New South Wales, Victoria, South Australia and Western Australia, all of whom have permanent Holocaust museums and education centres.

“As the number of survivors decreases every year, a memorial to all the victims is very important,” Mr Stein said.

“For all Queenslanders and visitors to have the opportunity to hear and learn about the Shoah (Holocaust) is vital for future generations.

“We must never forget what happened in the Shoah.”

In July 1982, Mr Stein organised the State’s first Holocaust exhibition, held in Brisbane’s City Hall over a number of weeks. It was attended by more than 10,000 people and hundreds of school groups. Then-Premier Joh Bjelke-Petersen was the exhibition’s patron.

It is expected the museum will gather objects and stories from survivors and their families, especially those from Queensland. Other world genocides will also be highlighted in educational programs.

Yad Vashem, the world Holocaust remembrance centre in Israel, has offered to provide resources to support the new centre, as has other Jewish and Holocaust museums.

Using the latest technology to create guided and online education experiences, the museum will be situated as close to Brisbane’s CBD as possible.

It will also work with Queensland teachers, including the 30+ teachers who have participated in the Gandel Philanthropy’s Holocaust Studies Program for Australian Educators, to help provide quality resources that will provide better learning outcomes for students.

Nikki Marczak, genocide scholar and Atrocity Prevention Coordinator with the Asia Pacific Centre for the Responsibility to Protect at the University of Queensland, commended the project, saying there was a strong imperative to build public awareness of the Holocaust and other genocides.

As the roof body of the Jewish community, one of the aims of the Queensland Jewish Board of Deputies is to raise awareness of the Holocaust and preserve its memory. The organisation has partnered with a range of organisations for the past five years to increase education and progress the concept of a permanent museum.

QJBD Vice-President Jason Steinberg shares his deep concern over this week’s demonstration, which featured the burning of an Israeli flag. Today (20 December) the Courier-Mail published his article on-line, for subscribers only. We have republished it below. 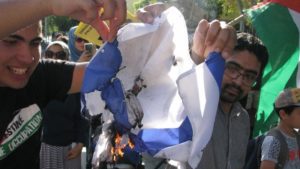 ON Saturday night in Brisbane there was a protest. People marched through the streets of the CBD under the protective guidance of the Queensland Police. Our great democratic society gives everyone this privilege, even if their messages are filled with hate.

These kinds of demonstrations happen often, but what was unique about this protest was the deliberate and disgraceful ceremonial burning of an Israeli flag.

What hatred. What an extreme and racist act. What a disgrace. What an attack on Queensland’s multicultural values.

The protesters were apparently marching in condemnation of Israel in retaliation for the United States government undertaking to deliver the long-held bipartisan commitment to move the US Embassy to Jerusalem and recognise that city as Israel’s capital.

For this reason, men, women and children shouted slogans demanding “liberation”, “from the [Jordan] river to the [Mediterranean] sea”, which includes not only the West Bank and Gaza Strip the Palestinians claim for a future state, but the whole of Israel’s legally recognised borders.

In other words, the chant is an explicit call for the destruction of Israel, the world’s only Jewish state, and the subsequent genocide of 6.4 million Jews living there.

I’ve lived in Brisbane all my life and grown up as a proud Queenslander, proud Australian and proud member of the Jewish community. Our community has, for more than 150 years, actively contributed to the fabric of Queensland society.

To have the burning of the Israeli flag on our peaceful streets sent a shiver down my spine and many other members of our community. What’s next after burning flags? Targeting Israelis? Targeting Jews?

Jumbled up with the anti-Israel hatred is anti-western hatred. Protesters must have missed that in April the Russian government issued a statement saying “we view West Jerusalem as the capital of Israel”. This attracted no controversy, no flag burning and almost no comment.

Those who deny the Jewish connection to Jerusalem seek to airbrush 3000 years of history attested to by innumerable archaeological artifacts. Jerusalem has been the centre of the Jewish world since 1010 BCE when King David made it the capital of the Jewish kingdom. David’s son, Solomon built the first of two Jewish temples there in the 10th century BCE. It was not until the beginning of the 7th century CE, some 1650 years later, that an Islamic structure was built atop the ruins of the Jewish temple.

Throughout history, Jerusalem has been ruled by one foreign power or another, including the Babylonians, Persians, Greeks, Romans, Muslims, Crusaders, Ottomans and the British. The only times when Jerusalem has been under local rule has been when it has been the capital of a Jewish State – ancient Judah/Judea and modern Israel.

Today, Jerusalem is like Canberra – it’s where the Israel’s parliament is located, its Ministerial offices, the Supreme Court, and the Prime Minister’s residence. Recognition that Jerusalem is the capital of Israel is therefore a pragmatic acknowledgement of an existing reality.

Another moment in history the protesters fail to acknowledge is that in July 1922, the League of Nations (the forerunner to the United Nations) entrusted Great Britain with the Mandate for Palestine which legally, under international law, recognised “the historical connection of the Jewish people with Palestine”.

Queensland’s Jewish community wants peace between Israel and the Palestinians. We, like all Jewish-Australians, want an enduring, workable and realistic solution, based on the right of Israel to live in peace within secure borders, and reflecting the legitimate aspirations of the Palestinian people to also live in peace and security.

The act of burning the flag of a sovereign state, and key ally of Australia, is not intended to support peace. It is an act of hatred and not in keeping with Queensland’s multicultural values.

Jason Steinberg is the vice-president of the Queensland Jewish Board of Deputies.

Paul Myers appointed as president of the Queensland Jewish community 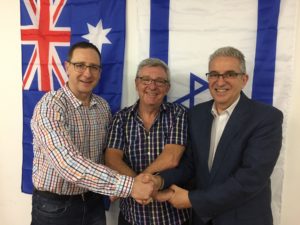 After eight years as president of the Queensland Jewish Board of Deputies, Jason  Steinberg, has handed the reins to long-time communal member, Paul Myers, at the organisation’s annual general meeting in Brisbane this week.
Steinberg, who has been involved with the board in various capacities since the early 1990s has been voted in as Vice President.
He said he was very happy to be handing over to Mr Myers, who is a former Maccabi Queensland President, to lead the communal roof-body that represents more than 4500 Jewish people.
“Paul is a well respected member of the community, a true Queenslander and a great person who will bring a range of skills to the role, including a strong consultative approach,” Jason said.
“I’m very proud of my role representing the community since 2009, having organised the celebrations of our 150th anniversary, helping establish the Queensland Parliamentary Friends of Israel, securing funding for Holocaust
remembrance and ensuring relevant organisations established child protection policies.
“It’s also been the initiatives and activities behind the scenes that have helped our community along the way to grow, resolve issues and remain safe which make me most proud.
“I look forward to maintaining my strong involvement in the community and providing a voice for Queensland Jewry.”
Mr Myers said he was looking forward to the years ahead as president and the opportunities the QJBD has in leading a small community that has population in Brisbane, the Gold Coast, Sunshine Coast and far north Queensland.
“Next year will be our 70th anniversary, just as it will be the State of Israel’s, and we have a great opportunity to continue to support our affiliated organisations grow,” Paul said.
“A key focus in the coming years for me is to provide a platform and a positive environment for our youth leaders to reach out into our broader community. We also have an aging population in Brisbane and the Gold Coast, so there’s a
lot to do to support this important group.”
The meeting also confirmed David Paratz as a Life Governor in recognition of his dedication and service to the QJBD for more than 30 years. Paratz has served as President, Vice President, Immediate Past President and on the
interfaith committee.
Mr Paratz said he was honoured to be given the position and was pleased to be able to continue to assist the QJBD in it’s role to provide united representation for the benefit of the whole of the Jewish Community of Queensland.
Mr Paratz joins a former long-serving President of the QJBD Laurie Rosenblum, OAM, with the Life Governor honour.